Apply to the best Universities and Language Schools in Ireland 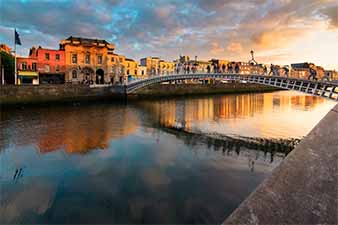 Why study in Ireland

Universities across the relatively small country of Ireland rank impressively high on an international scale, making the country one of the most popular destinations for international students from all backgrounds and cultures. Ireland’s education system boasts 7 public universities, all of which rank within the world’s top 100 according to QS World University Rankings. It is also home to a myriad of top-notch private institutions, colleges, and universities.

Ireland might be one of the closest neighbors to the UK, sharing borders over ocean and land with one of the most expensive countries on earth, but it remains a relatively affordable option for students and international travelers coming to the country. The cost of living in Ireland is significantly lower than many other premier destinations in Europe and the US, and even the most expensive city in Ireland, Limerick, ranked 32nd in the world. The country’s most popular and populous city, Dublin, falls at 46th, beneath London and many cities in the US!

Tech giants such as Google, Facebook, and Twitter all have offices in Ireland, alongside an impressive 9 of the world’s top 10 pharmaceutical companies. Beyond this, over 700 US companies now have locations across the country, which means that students – especially those in pharmacy and technology – are going to be faced with a wealth of opportunities post-graduation.

Despite the country’s small size, Ireland has always had a reputation for being home to a higher-than-average proportion of cultural impact. Prominent scholars, authors, and poets such as James Joyce, George Bernard Shaw, and Oscar Wilde have all called the country home, and this fact has helped shaped the culture of the country over the years. Dublin’s streets are brimming with artistic and literary nooks, from the National Museum to the Hugh Lane Gallery. Beyond Intellectual and artistic pursuits, the country is absolutely fanatic about its sports.

Known as the “Emerald Island,” Ireland is home to hundreds of awe-inspiring sites, views, and experiences. Plus, since the island is so small, you are only ever a few hours’ drive from outstanding scenery – and odds are you’ll stop along the way to see something you didn’t plan for or expect. In major cities, beautiful parks – like the Phoenix Park – and rivers carve through the cityscape.