Apply to the best Universities and Language Schools in Russia 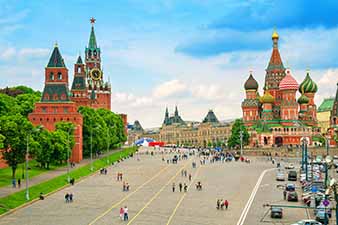 Why study in Russia

With borders touching Europe, the Middle East, and Eastern Asia, as well as the Pacific Ocean to its east and the Arctic Ocean to its north, Russia is the largest country on the planet by a rather large margin. Its vast geographical mark on the globe means the country has been affected by a range of conflicts, wars, and empires, all of which have left their mark in some way on the country. Its culture, rich in varied practices and traditions, is built upon its deep history on two of the most developmental continents on earth. Locals and visitors enjoy beautiful landscapes, historic cities, and access to some of the best businesses and academics in the world.

Russia is home to a vast array of the world’s leading institutions, universities, colleges, schools, and programs, offering a range of studies, courses, ad emphases that appeal to students of all interests from every background on the planet. Russia recently earned a premier ranking on Bloomberg’s list of the planet’s most innovative economies, but its innovative spirit is not limited to the financial sector: a Russian education intricately intertwines traditional academic rigor with a commitment to innovation.

International students studying in Russia are drawn for a wide variety of reasons, not leas of which is the price of tuition. The price tag for education in Russia is extremely inexpensive, especially in comparison with the quality of training which it purchases. Typically, tuition can range from 2,000 to 8,000 USD annually, with added costs such as room and board and books ranging from 1,500 to 5,000 USD a year, depending on your chosen location.

Riddles with examples of glorious architecture and vivid history that lend to its vibrant culture and vivacious nightlife, student will never struggle to find things to see, do, and discover in Russia. Not only is Russia home to multiple climate zones, appealing to students looking for all four seasons and those looking to take their studies to a more temperate destinations, it is also home to a whopping 26 UNESCO World Heritage sites, including Red Square, the Kremlin, the Golden Mountains of Altai, and Lake Baikal.

While the government is not known for its flexibility or even its acceptance of much that goes against the ideals of its leader, the people of Russia are known to be very accepting and welcoming for foreigners from multiple backgrounds, religious upbringings, and origins. For decade, if not centuries, people of different cultures and nationalities have been making a noticeable contribution to the Russian development.

Not only are the locals friendly, but the population of Russia is also diverse. Made up of over 160 different ethnic groups speaking more than 100 different languages, locals come from a wide variety of backgrounds and traditions. Students deciding whether or not to study in Russia are often drawn to the culturally rich environment created by the incredibly diverse population of Russia.