Apply to the best Universities and Language Schools in Malta 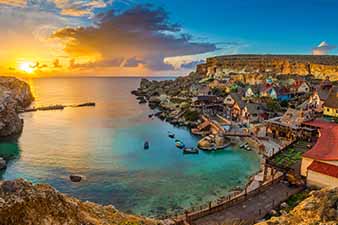 Why study in Malta

With a population of just 450,000 citizens, as well as guests, students, travelers, and more, Malta is one of the world’s smallest countries. An archipelago, the nation is made up of a group of islands, only a few of which are inhabited. Its strategic location in the middle of the Mediterranean Sea, just south of Sicily and North of the African continent, has given it a broad spectrum of historical significance that adds to the country’s natural beauty. Its towns are rich in culture and its terrain is nothing short of majestic – the islands are surrounded by crystal clear water and the climate is nearly always warm, making it an ideal destination for any traveler.

Malta’s education system is very highly regarded the world over. The country is home to public, private, and international schools, each of which subscribe to a variety of curricula. Overall, however, Malta tends to follow the British structure and curriculum, which is one of the leading in the world.

Students venturing to Malta will be welcomed with open arms by locals, who love their country’s guests and strive to interact with them in every possible circumstance. Not only is the country widely friendly toward tourists, students, and others, but it is also safe: crime and violence are very low in the archipelago, and it is rarely caught in the middle of any international conflicts.

Despite being one of the smallest countries on earth, Malta has an incredibly varied culture, landscape, and history that provides something for everyone. Students can choose from a range of institutions, explore a plethora of sites, and take part in many excursions. In short, you’ll never be bored in this Mediterranean destination.

Malta’s location in the middle of the Mediterranean Sea made it a significant cluster of islands for a variety of long-standing and powerful empires and people groups. The list of those that have ruled or laid claim to the islands over the course of their history include the Phoenicians, Carthaginians, Greeks, Romans, Byzantines, Arabs, Normans, Sicilians, Spanish, Knights of St. John, French, and British, meaning that the beautiful culture of the archipelago is shaped largely by its fascinating history.

Malta, with its history, culture, weather, and strong academic programs, has attracted students from across the globe to its beautiful coastline, ancient towns, and revered institutions. Choosing to study here will put you among other top scholars and give you insight into even more cultures and traditions from around the globe.